Jovnna is a young boy who lives outside the city. He gets annoyed when he can`t join the drum classes his best friends are attending, because his mother isn`t there, driving him to the cultur school. Frustrated he goes to his grannys old, abandoned house, and there, drumming out his anger, he suddenly finds an old birch drum. This drum connects him with little Ellen – who disappeared a long time ago, and got cought in the middle of this world and the world of the dead.

The space where Ellen is stuck is dangerous, and Jovnna wants to help her out, albeit he will loose his new little friend. Together they travel with the magic drum into another world and get help from magic animal spirits, to bring together the pieces of the strange puzzle.

The publication is supported by the Sámi Parliament of Norway. 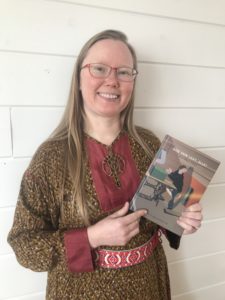 áret Paltto is from Fierranjohka in the Tana valley, which is traditional Sámi area, on the border between Norway and Finland up in the north. She is Sámi and uses the traditional Sámi spiritual practices as a ground for her litterature, at the same time as the narration is placed in a modern setting.

Kirsi has also published an application with the story of Nigá and Nelle and a CD with music for children, Hutkangiissá lávlagat.

There are no reviews yet.

Only logged in customers who have purchased this product may leave a review.